NEMA and IEC Motors May Be Related but Not Identical Twins

Some of us in the world use the metric system for measurements with millimeters, kilometers and kilograms; others use imperial measurements with inches, miles and pounds. Likewise motor standards in the North America are governed by the National Electrical Manufacturers Association (NEMA) and the standards book is MG 1-2014 which defines definitions, performance and dimensions for AC and DC motors. The International Electrotechnical Commission (IEC) regulated motor standards for the rest of the world through the use of standard 60034-1:2010. NEMA three phase induction motors defer testing to IEEE standard 112b and CSA 390-10 and IEC standard is 60034-2-1 which are now harmonized together. NEMA and IEC motors are similar in size and frame. 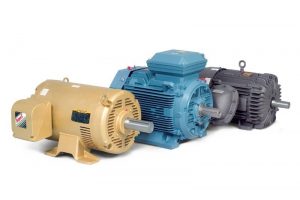 Despite similarities in size, testing methods and efficiency levels, electrical and mechanical expectations in the market are often quite different. Most low voltage (<600 V) motors for North American are designed for 230, 460 or 575 volt 60 Hz systems and started across the line or used with a drive. The IEC standard is a wye/delta winding (Y/D) to reduce inrush on starting, which can also be used with a drive. Although Y/D is sometimes used in North America, it is not common. Voltage variation is ±10% for NEMA and only ±5% for IEC. NEMA motors utilize lead wires for connection where IEC motors use a terminal panel. NEMA terminal boxes are located on the side of the motor where IEC are usually on the top, often at the shaft end of the motor. NEMA motors are built with either a rolled steel frame that is common on TEFC motors through 10 HP or on larger ODP motors. NEMA 1 HP and larger TEFC motors are also available with finned cast iron frames. ODP motors are not common for IEC, only TEFC and with either finned aluminum or cast iron frames.

From the performance standpoint, the norm is NEMA Design B for general purpose motors with a version having a higher inrush current termed NEMA Design A. Either NEMA Design A or B could be classified under IEC Design N. A motor with higher starting torque is called a NEMA Design C which is similar to an IEC Design H. NEMA motors usually have a 1.15 Service Factor where this is not present in IEC designs